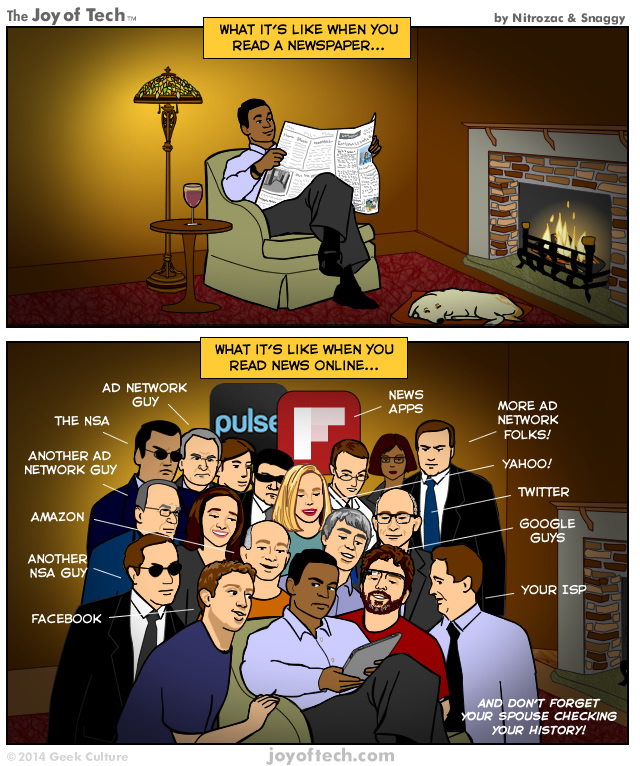 (“Comic courtesy of our friends from the Joy of Tech.)

“We have a human right to privacy.” (Tim Cook, CEO Apple)

Intelligence agencies are extensively spying on us all and without any justfication. That infringes the laws of our democratic countries and our basic liberties. It’s alarming and dangerous. The agencies command the largest surveillance machinery in the history of mankind – financed by taxpayers, but widely unchecked by our governments. This is in no way acceptable.

Another major threat lies in the role of the digitally driven economy, in particurlar the big, global data players. To some extent we provide our private data voluntarily, but we get tracked without our knowing or without our agreement. Nobody is forced to use facebook, for example. Who doesn’t use it, is still getting tracked by facebook. In addition, the intelligence agencies are reading along anyway.

We don’t want to endure this any longer. The feeling of menace and the unpleasent after taste when using all those new devices and services isn’t so healthy either. But instead of giving up, we will now strike back.

The first step is to stir things up and figure out what we can achieve by using the simplest of applications. The second step is getting down to business. Read more about how it works:

We're fighting back against the illegal mass surveillance by the intelligence agencies with a simple trick: Our online-campaigns generate misleading data tracks. An example: Suddenly loads more people are searching the internet for baby clothes than usual. Sounds silly, but it isn't. The systems will wrongly calculate a higher birth rate. With just a few clicks we will throw a spanner in the surveillance works and blur our profiles. – It's fun, legal and so easy even my granny can join in. Will you come along, too? Accurate! – Subscribe to our newsletter and follow us on the social networks!

Join us via following: